The following article is in two parts. The Foreward is written by Dr. Matthew Jackson of the Massachusetts Eye, Ear Infirmary in Boston. The main article is written by Sol Soroca, President, of the Flexite Company, Mineola, New York.

The patient is a 51 year old white female. In April 2001 she complained of increasing pressure of the left maxillary area. The history of her present illness goes back to 1981 when she underwent an excision of a maxillary tumor in the left bicuspid region.
Although actual pathology slides were not available, it was reported to be a giant cell tumor. Since that time, she has had intermittent pressure and fullness in the left sinus region but no gross appearance of a tumor. As a consequence of her first procedure, both the upper second bicuspid and first molar had endodontic treatment. Recently, her symptoms of fullness and pressure worsened. Plane x‐rays and CT scans were obtained preoperatively and she underwent a biopsy. A soft tissue density of the palate was found extending superiorly along the floor of the maxillary sinus. Pathology indicated this was a fibroblastic osteogenic sarcoma.
In July of 2001 the patient underwent a total left maxillectomy and postoperative radiation therapy utilizing both photon and proton beam therapy. This was completed in 9/01. (Figure A) She has been disease free since. An Obturator Prosthesis utilizing conventional acrylic and
wire clasping with obturation for her maxillary defect was constructed. The patient was understandably unhappy with the esthetics and retention.
For both aesthetic and retention consideration in August of 2004, a new Obturator Prosthesis was fabricated by Sol Soroca CDT, President of the Flexite Company.

Dr. Matthew Jackson of the Massachusetts Eye and Ear Infirmary called me to discuss the possibility of using one of our Flexite thermoplastics for a very unusual case. The patient required a Definitive Obturator Prosthesis. The patient was a 51 year old female with half of her maxillary removed due to cancer.
She was left with a hugh gaping hole in the palatal area and had numbers 1‐8 teeth left in the arch. (right central, lateral, cuspid, first premolar, second premolar and the last three molars.)
She had been wearing a conventional acrylic partial with wire clasps. It left much to be desired and the patient was unhappy with the esthetics and function of Figure 1 the appliance.
I requested a study model to determine the path of insertion and to sketch a tentative design. After visualizing what Dr. Jackson had described to me, I knew that it would require extraordinary skill to take an impression of this magnitude. I received a good study
model soon after. It indicated to me that I would be working with a skilled doctor so I accepted the challenge. ( Figure 2 Study model )

Several years ago, I had made a provisional partial that covered half a palate for an implant case. I knew that an anterior flange made from one of our flexible plastics could be used for retention and might be successful in this case. ( Figure 3 Provisional Partial )

Dr. Jackson then proceeded to take the master impression and bite registration. His laboratory articulated the models. ( Figure 4 View of articulated models )

Establishing a path of insertion.

The long axis of the anteriors had to be set almost parallel to the analyzing rod. Allowances had to be made for the interproximal areas which were utilized for retention. The blockout stage was equally important.( Figure 5 )

All undercuts not utilized for retention were blocked out to allow for a smooth insertion. The model was then duplicated. ( Figure 6 )

The setup was transferred to the duplicated model and waxed prior to flasking. (Figure 7 Anterior view) (Figure 8 palatal view) It was decided to do this in two stages.

The prosthesis was invested in a special flask and the injection process was completed. The partial was
then finished and polished. (Figure 9 Anterior View) (Figure 10 palatal view) 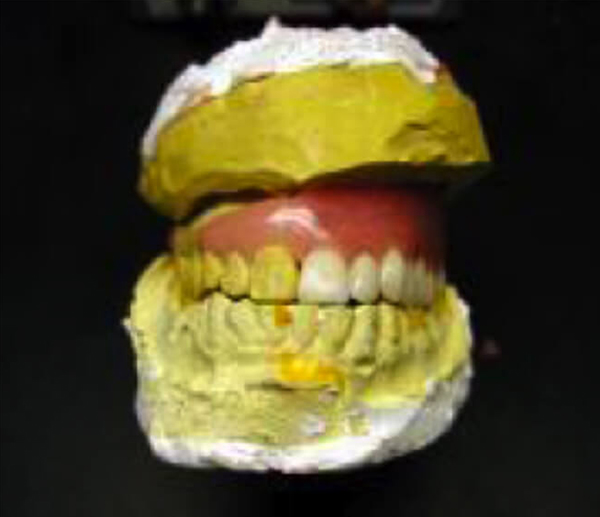 The second stage required the cavity to be filled with acrylic. Another model was duplicated from
the master model ( Figure11 ) and used to attach the acrylic to the palatal surface of the completed prosthesis. The pour method was used to
accomplish the final step. This way we preserved the integrity of the master model.

Different views of the Definitive Obturator Prosthesis off the model.

Before and after views of the Definitive Obturator Prosthesis.

Any cookies that may not be particularly necessary for the website to function and is used specifically to collect user personal data via analytics, ads, other embedded contents are termed as non-necessary cookies. It is mandatory to procure user consent prior to running these cookies on your website.